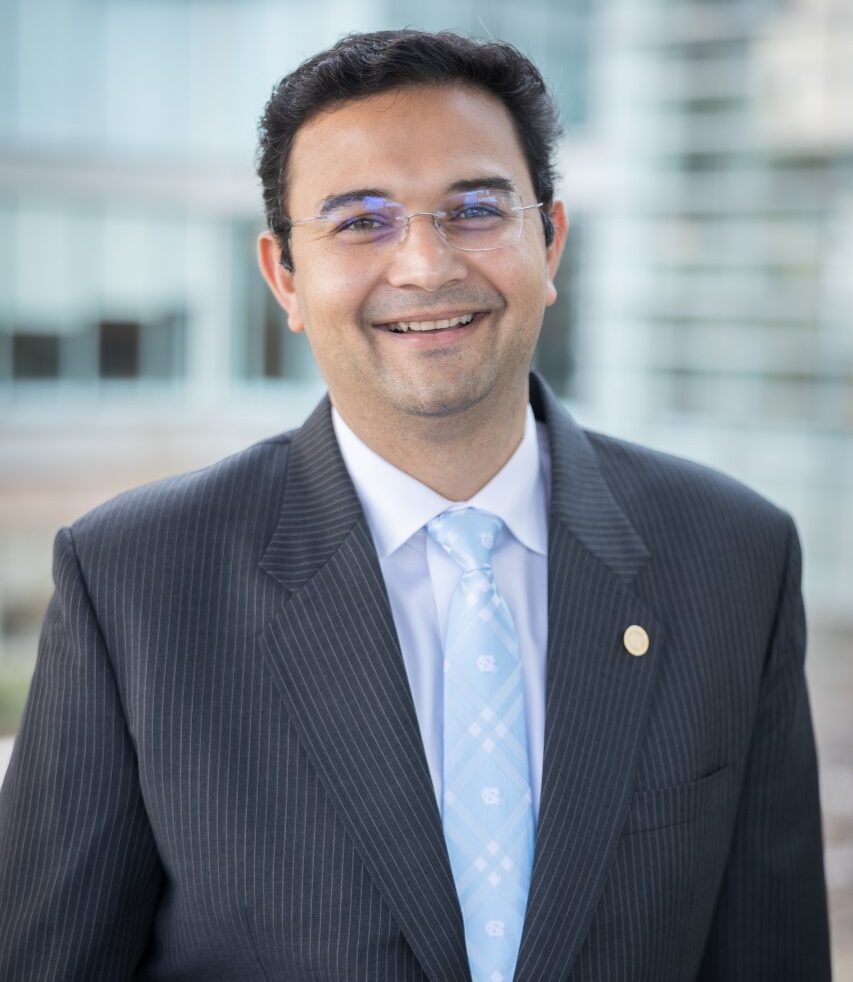 Dr. Vibhor Krishnan is a surgeon-scientist who specialises in stereotactic and functional neurosurgery, using electrical stimulation and targeted ablation in various therapeutic regions of the brain, spinal cord, or personal nerves to enhance patient symptoms and quality of life. He sees patients with movement disorders such as Parkinson’s Disease, Essential Tremor, Neuropathic pain, Epilepsy, and other Psychiatric disorders. After observing patient symptoms improve during a study involving patients with depression, he became interested in learning how stimulation in various areas of the brain modifies the network dynamic and improves patient symptoms during his residency.

How would you define Neuromodulation?

VIbhor: Neuromodulation involves targeted Intervention, which could either be electrical stimulation in the form of ablation or targeted drug delivery to restore network Dynamics in the brain in patients with different disorders. We understand that the brain networks sometimes are not functioning properly at their physiological levels. One way to improve patients’ lives would be to go back and understand the pathology, which will, in turn, normalise the brain networks.

Another way to look at it in the Neuromodulation space is to say that given the disease pathology, there are certain network dynamics changes. What can we do in this current state with our interventions to restore the physiology without reversing the underlying disease pathology? There are still challenges that remain in restoring the brain structure and function in patients with different disorders, Neuromodulation is what interventions can be done to restore the brain.

Jonathan: These pathological processes can take all kinds of forms, for example, the evidence on the genetic drivers behind depression seems to be that there’s certainly a very strong heritable component. If we were reversing the disease process, we’d be talking about editing the genome or at least intervening at some level where the genome was being translated into Network characteristics, in some of these situations, it’s very hard to imagine how this could be done post-conception and development of the organism, but that’s very interesting.

How would you describe focused ultrasound and what is its importance in neuromodulation?

Jonathan: One of your areas of interest in neuromodulation is high-frequency ultrasounds. What’s special about this modality, and why are you particularly interested in it

Vibhor: Focused ultrasound is an emerging treatment for neurological disorders, it’s FDA approved for the treatment of Essential tremor, Parkinson’s disease and what’s exciting about this treatment is that you could ablate very precisely specific areas in the brain to restore the network Dynamics and this could be done without a surgical intervention, without opening the skin or drilling a hole in the skull.

The idea of focused ultrasound is derived from some of the concepts in radiosurgery but this time we have an ultrasound transducer which looks like a helmet, it’s an hemispherical array, and there are a thousand or more different transducer elements that are organized in this helmet and these transducer elements are confocal at a single point in the centre of the helmet and by itself the ultrasound energy that’s delivered by the elements is not sufficient enough to perturb the brain structure or function but then when thousands of these elements combine together at a single spot we could achieve energy levels that can do a variety of different things so ultrasounds can be used to ablate inside the brain which is the most advanced clinical application or they could be used to open blood-brain barrier and deliver therapeutics in very precise locations and these could also be used to do some non-invasive neuromodulation which depends sometimes on temperature-based neuromodulation, thermal neuromodulation or even without increasing the temperature you can modulate the function of the nervous system with ultrasound.

What important variables are monitored during treatment?

Jonathan: Would location and temperature be the most important variable to monitor, and are we able to do this with MRI and the improved modelling, what would you consider the important variables that matter in terms of the fundamental ones that count?

Vibhor: The two fundamental feedback or variables monitored during the treatment are location using MR Imaging and temperature. You could precisely monitor a temperature rise in real-time, and based on the thermodynamic equations, say a temperature rise of so many Centigrades for so many seconds could bring manipulation in the brain. Based on that approach, you could precisely choose your targets in the brain and ablate those areas. The other factors that could be of interest include the skull because the skull is the major impediment in ultrasound delivery. Certain skulls are more favourable for ultrasound delivery than others.

Jonathan: Is skull density an important variable, or is the shape a factor too?

Vibhor: When you look at the skull, several other factors can come into the picture. The thickness of the skull helps us understand the variability, and shape is also important; if they were to be incident on the skull, they are most efficient to go through if they have a certain angle, and if that angle continues to increase, then the chances that the ultrasound will pass through reduces.

Jonathan: We talked about how this is a targeted ablation, but another interesting aspect is being able to control the temperature, we’re at least monitoring and controlling it, and thanks to that, you needn’t immediately cause an ablation, you can raise the temperature and cause a temporary impairment of function.

Vibhor: The application to functional neurosurgery becomes very exciting when you could control the amount of ultrasound that you could deliver and as you widely described initially you deliver only a small dosage by monitoring the temperature and making sure you don’t go beyond a certain threshold where the tissue changes could be permanent and so you keep it below the thresholds so that you could reversibly heat up the tissue and that could allow you to in a limited way interrogate your targets and understand whether a permanent ablation of this target would preview the symptom relief that you’re looking for or would it cause you to have side effects if you are off target it could have side effects as well and so there is a possibility for a course correction before you make an ablation permanent and that’s what makes it exciting for some functions

Jonathan: One might think you’re on target, on the basis of your Imaging, but then you raise the temperature at your putative target and you find that you induce some side effect like one of the most Ataxia or some dysarthria then you can adjust it on the basis of those clinical signs and maybe move more medially and then try again and just by a process of trial and error find the right spot is that right?

Vibhor: You’re right. Based on standard Imaging, you have a very good sense of what the specific target would look like in most patients. Still, we know that all of us have uniqueness, and taking that average information, you assume if I were to interrogate this area, is the patient having any side effects?

What opportunities are there for improvement in identifying predictors of patient outcomes?

Jonathan: Some of your work has been on identifying those predictors of the patient outcome, how much success are we having, and what do you think the big opportunities for improvements are?

Vibhor: We wanted to know, who are the patients who would have a likelihood of improvement, and in some of the work, we understand that younger patients, patients who have shorter disease duration, are the ones who seem to have better outcomes than older patients with more severe disease than we noticed, that there are some technique related factors as well. So during a treatment if you are able to increase the temperature to therapeutic levels you know 55 or more degrees, that was associated with better outcomes than treatments where this temperature threshold was not achieved and this makes sense, if you were to ablate the tissue you want it to be fully ablated, you wouldn’t want it to be partially ablated and then there are factors that are technique related, that the less number of total treatments or sonications that you can deliver to achieve the desired effect, the better it is and some of it comes back to how the skull behaves when it has been exposed too many times towards the sound and sometimes leads to the Distortion of the focus of the treatment, moving forward what we are looking at and investigating as a part of our research program is to figure out ways to optimize this treatment where you could  achieve this in the least number of sonications and improve the safety of this treatment, improve the effectiveness of this treatment by leveraging advances in neuroimaging where we bring in information from cryptography that allow us to have patient specific map to identify these specific therapeutic areas and also, use Advanced Imaging MRI to characterize the tissue response in real-time and see what part of tissue is permanently ablated, and what part we can still work on to achieve further regulation.

Jonathan: It’s a combination of multimodal data sources and learning how to bring them together and turn that into a functional understanding of the pathology and the patient, so there is a lot of work to do for the future.

What skills are important for new clinicians to develop as the field becomes multidisciplinary?

Jonathan: We talked about what a multi-disciplinary project this is. What would you recommend to young clinicians starting in their journey. What skills should they be trying to acquire, and what should they be getting trained in, to supplement the pure clinical, it sounds like there’s so much opportunity here for ancillary skill sets such as coding or mathematical training what’s the most useful Arrow to have in your quiver?

Vibhor: This is a great question Jonathan and I’ve been thinking about this more and more lately. The training within the traditionally defined disciplines helps us deliver care to patients to improve their lives. As we move forward though, we would definitely need training which is transdisciplinary where the clinicians are trained in neuroimaging diagnosis, coding and then be engaged in testing and optimizing their techniques and understand what’s the relevance of these techniques for clinical care for us to have a translation from all the knowledge that’s generated in Neuroscience research, we need people who are at that intersection or training in multiple disciplines and allow us to look at some of these emerging scientific directions and really understand how they apply to clinical medicine, clinical neuroscience and what can be done to really improve so that we are able to continue to grow the patient base and then be able to deliver care to some of these patients who currently don’t have treatment options

Jonathan: I sometimes wonder if the time isn’t right for a new clinical speciality to emerge, it should be something like computational Physicians or computational surgeons or something like this people who were essentially Jewel trained in the relevant engineering and clinical work although as you’ll be aware it takes so long to train as a doctor and so long to train as an engineer, it seems somehow this will always remain a multi-disciplinary team we have to learn how to  work with other Specialists and how to talk to each other even if we can’t be completely fluent in each other’s languages

Vibhor: Absolutely, and organisational leaders in healthcare should think about bringing these different fields together to share ideas and discussions to be able to make that transformation for the future.

This is the highlight of the interview. If you like to explore more, please visit our YouTube Channel.

Hit enter to search or ESC to close 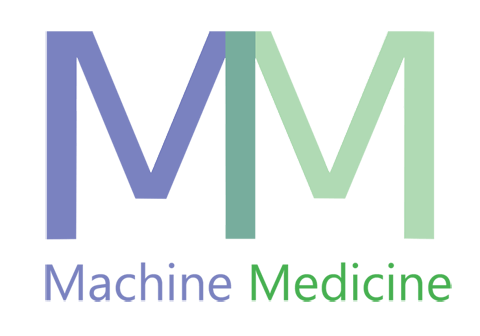